The Prestigious award was given to Greg Madden by the Portland Business Journal (PBJ) at their October 30, 2014 awards event held at Portland’s Sentinel Hotel. The PBJ honors some of the smartest and most innovative companies in Oregon. This award acknowledges the successful effort that Madden Fabrication has put into its transformation from a fabrication job shop to a manufacturer with the capabilities to successfully develop and manufacture projects such as the Portland Loo. Review the article about the PBJ event here.

Starting in Late 2010, Madden Fabrication committed to improving its operations and utilized an outside consulting service to help in its lean journey. By evaluating and improving operations in workplace organization (5S), value stream mapping, tracking and reporting quality, production and on time delivery. The results were measurable improvements in all areas of operation including improved efficiencies, margins and most importantly customer satisfaction.

Although our lean efforts have helped us meet many goals and developed an overall efficient lean culture, Lean is a continual improvement process. Madden Fabrication strives to constantly improve, and continues to utilize consulting services from Charlie Martin and his firm, Manufacturing Matters. View their services and more about Lean for Manufacturers here.

The historic 1925 Liberty Theatre in Astoria, Oregon, underwent an extensive restoration in 2000, and Madden Fabrication was instrumental in recreating themarque canopy that had been lost to weathering and neglect.

This beautiful recreation, with its corrosion-resistant stainless construction, ensures many more years of enjoyment of this glorious theatre. 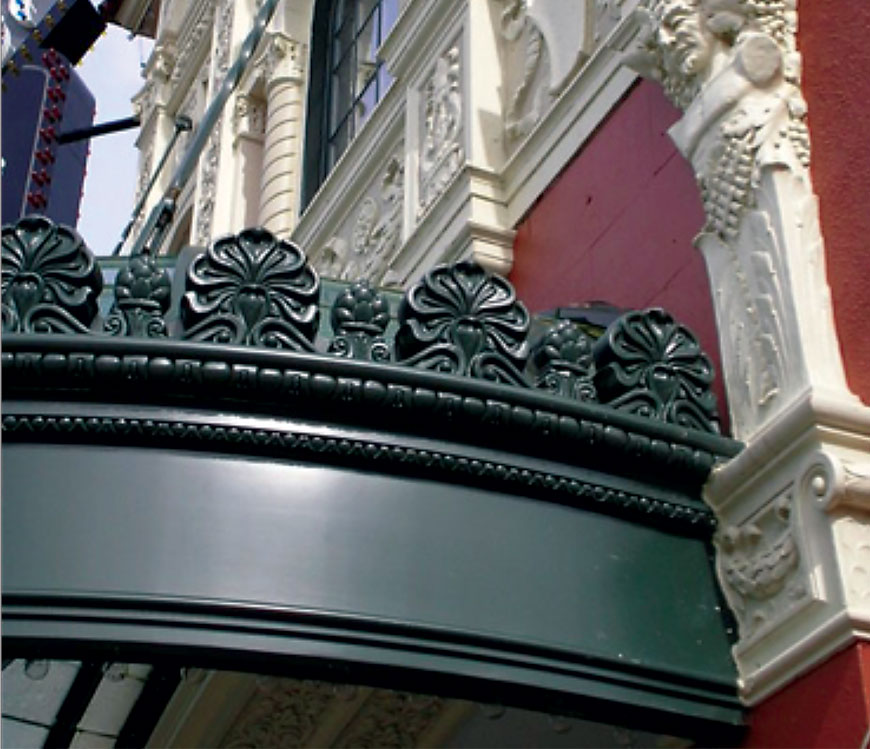 The Light Up The Lodge project began small, with the commission of floor and table lamps for the lobby and guest rooms, as a gift to Timberline Lodge for its 60th Anniversary. The project gained momentum after a significant fundraising auction and a matching grant from the Meyer Memorial Trust.

In 1999, Madden Fabrication was asked to assist GKA lighting in furnishing these fixtures for the historic stucture. Madden used a combination of CAD design, laser cutting, forging and expert metal working. The resulting fixtures proved to be an addition worthy of this wonderful landmark. To date, Madden Fabrication has provided major installations of custom-designed lighting in the Mt. Hood and Mt. Jeff banquet rooms and guest room hallways.

One of Madden Fabrication’s first and most historic projects was the renovation of the historic Crater Lake Lodge at the rim of the famous crystal-clear Crater Lake in south central Oregon. Working with Emerick Construction, the project was done in 2 phases due to the scale and the short building season. Phase 1, at $2.8 million, focsed on the “Great Hall,” centered in the oldest section of the lodge. The area had deteriorated so badly that the middle section had to be completely dismantled, including the stone walls and the giant stone fireplace. The designers worked to maintain a 1925 appearance, although many of the existing timbers were replaced or reinforced with structural steel provided by Madden Fabrication. Large cement foundation walls were poured, and the stone work was reapplied as a veneer. By building 10- to 20-foot cement walls, and adding structural steel, stability was provided for the center section.

The remaining two end sections of the lodge—the wings—were connected to the rebuilt center section which helped to stabilize them. The wings were reconstructed during phase two at a cost of $8.9 million. The renovated wings added 71 rooms to the lodge, each room larger than the original rooms, and the entire project took nearly three years.

Because of the precarious location of the Lodge, the Park Service is still studying the erosion problem behind the lodge. One scientist says the slippage is great, while two others colleges say the rate of sliding is virtually nonexistent…”at least during the life of the new lodge.”